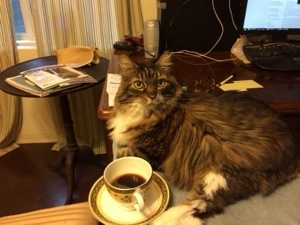 7-13-2014.
It seems to me that at various periods of my life I have lived from different chambers of a flexible mind. The current chamber is telling me that if I really want to make a meaningful and positive contribution to society that I need to dedicate a major chunk of time to thought and writing. To do that I require a support system. Currently my support system and my thought and writing time are in competition for my attention. As either wins a greater share the other suffers. The paradox is that if my support system was advanced enough I would have the time to think and write all that I desire.

A recent revelation that I have had is that when there is a paradox or an unclear best choice, one should look for the most practical solution and get done what needs to be done.

For this reason I am going to have to put my writing and the pondering of the mysteries of the Universe and those of this human world on the “back burner” so to speak while I build my support system(business) to a more advanced state and a more self supporting entity. So my blog posting will at best now be more sporadic. I will still attempt to splice together the daily observations that I allow myself in between the practical business of building a business.

What follows are some observations I’ve had over the last few weeks:

6-30-2014.
Do we have a choice of what we think about and how we think about it? Can we choose not to dwell upon painful, trivial or unproductive things? Can we recognize when limiting, incorrect or self defeating thoughts enter our consciousness? It seems to me that many people cannot do these things. Otherwise we would not have so many people exhibiting addictions or seeking help for psychological angst.

Rather than accepting the current imperfect system completely, embracing it and just “doing life” the best we can, I wonder if there might be a better way. Possibly some sort of a blend between acceptance, exploitation of the system and working to change it. Accept what currently is and exploit it to obtain our material needs. This will also create our desired local environment and time. Then with that liberated time, engage creatively in our life’s work which might be that of bettering humanity. Exploitation sounds harsh but it is what we all do in order to survive(think about a humming bird who exploits the facts that flowers contain nectar and that they happen to have a long tongue).

7-4-2014. Nature is a system that works and not for the benefit of any one organism. As we evolve non-biologically through technology, knowledge and understanding we are taking ourselves out of nature per se but that does not give us the right to take down what spawned us in the first place. If for no other reason than “it is”, nature should be left alone. However a practical reason to not sully this natural system with our inventions is that of an insurance policy, should we, this offshoot of life fail or be wiped out by some unforeseen circumstance. The theory is that the natural system of life, left to its own designs would again, eventually produce advanced intelligence.

7-11-2014.
On the way to do some shopping I looked out the window and saw only the ugliness of a society mired in “put ’em up cheap” condos, a few types of mass industrially-cloned plants and prepackaged everything including our idols and heroes. Everything has been brought down to the lowest common denominator. It seems as if I am seeking authenticity where this is none.

In the stead of offering an education to everyone equally, the level of which is based upon ability, we doll it out based upon family wealth. To keep the masses from revolting we produce entertainment and cheap goods to keep them pacified.

Yes we all enjoy a rising standard of living but it withers in comparison to what it could be. Our progress is nothing compared to what it could be if people were allowed to rise to their individual innate abilities rather than have an education (or lack of) dictated by the ability of one’s recent ancestors to compete for position in a flawed society. I wonder how many would-be researchers or inventors are toiling away at menial tasks so they can purchase their processed food, plastic toys and worship the factory produced sports hero or entertainer du jour? What might they create if they had been exposed to other possibilities, possibilities which could drive their evolving interests from a young age and then educated based not on family income but on interest and ability?

I am anticipating what you are now thinking and maybe it goes something like this, “Ok Peaceman, fine but we already know that things are not as they could be. What are you doing about it?” My hope is that before I check out of this system of matter that I will have left behind something that, even if only incrementally, furthers our quest for humanity’s improvement. I’ll certainly let you all know when the book is published.